Eastern Europe has recently witnessed a wave of campaigns against marriage equality, transgender rights, sex education, antidiscrimination policies, gender studies programs, and even the concept of gender itself. A new generation of activists is fighting back and transforming their societies in the process. We have gathered a dynamic and powerful group of activists for this crucial conversation. The Center for European Studies thanks Ileana Nachescu and Vlad Viski for their outstanding efforts in organizing this important conversation and hopes it will be one of many. 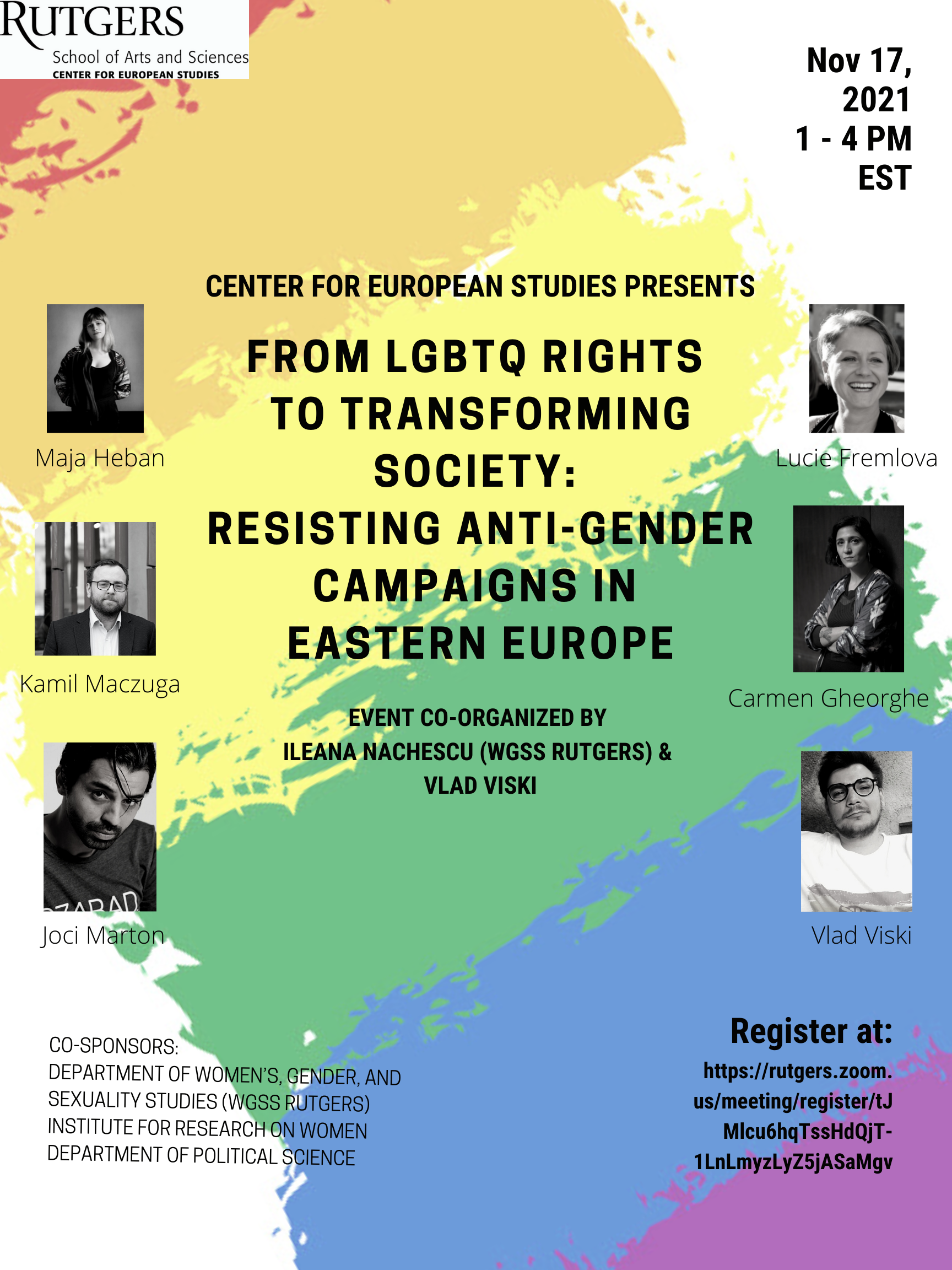 Dr. Lucie Fremlova is an independent researcher who works at the interface between academia, social movements, and policy. Her book Queer Roma has recently come out (Routledge 2021) and her article ‘LGBTIQ Roma and queer intersectionalities: the lived experiences of LGBTIQ Roma,’ published by the European Journal of Politics and Gender in 2019, won the EJPG 2021 Best Article and the Council for European Studies Gender and Sexuality Research Network 2019 Best Article Award. Her article ‘Non-Romani researcher positionality and reflexivity: queer(y)ing one’s privilege’ was the most-read article published in 2019 in volume 1, number 2 of the Critical Romani Studies Journal.


Dr. Carmen Gheorghe is a Roma feminist, activist, and scholar. She has been engaged in civil society for the last eighteen years focusing on grassroots work, community development, gender issues, intersectionality, politics of identity, violence against Roma women/girls. She is the co-founder of E-Romnja Association (The Association for Promoting Roma Women’s Rights), a Roma feminist organization based in Romania that is building a new narrative about Roma girls and women in Romanian society and community.


Maja Heban was born in 1990 and transitioned in 2010. She is a transgender activist and journalist currently employed at Noizz.pl. In her activism, Heban uses stories of her own experience to help cisgender people empathize with transgender issues and gain some level of understanding. Heban is very active on social media, both due to her own fondness for the medium and to the fact she became a recognizable activist during the COVID-19 pandemic. Recently heavily involved in the fight against the gender critical/trans-exclusionary radical feminist movement in Poland, she is considered a central figure in this struggle.


Kamil Maczuga is an LGBT activist from Cracow, Poland. He is the co-author and spokesperson of Atlas of Hate – a project that is monitoring, reacting to and fighting back against anti-LGBT resolutions in Poland. Atlas of Hate was the first Polish group in history nominated for the Sakharov prize. Currently the whole team is being sued for defamation by several local governments represented by the ultraconservative foundation Ordo Iuris.


Joci Marton is a Roma LGBTQ+ activist from Hungary. Born in 1985, he grew up in a small mining town in the North-east of Hungary. He graduated as a teacher with a Romology specialization, then participated in the CEU Roma Program. In his work, he focuses on intersectionality and identity politics. In 2019, he organized “Owning the Game,” a project developed in collaboration with the Roma LGBTQ+ community, with the aim to create photographic and video content about themselves – along with poems and other writings – that portray them with dignity. Joci is a founding member of “Ame Panzh,” an informal Roma group that broadcasts contents on social media from a feminist and queer Roma point of view.


Originally from Romania, Dr. Ileana Nachescu is Assistant Teaching Professor and Assistant Undergraduate Director with the Department of Women’s, Gender, and Sexuality Studies at Rutgers University. She has written about gender and sexuality in Eastern Europe for both academic and public journalism venues. Her work has appeared in Feminist Studies, The Advocate, Aspasia, The Rumpus, The Boston Review, Michigan Quarterly Review, and elsewhere.


Vlad Levente Viski received his MA in Political Science from the Central European University, with a thesis about the LGBT movement in Romania after 2001. He has published articles in them.us, The Advocate, Vice, and was interviewed and quoted in the New York Times, Associated Press, Washington Post, The Independent, LA Times, NPR, and other places. In 2019 he co-curated the exhibition “OBJECT. Traveler through Public and Personal Stories” at the National Museum of Contemporary Art, Bucharest, and in 2017 he worked on the exhibition “SAVAGED pINK. History of 90s Gay Press” at the ODD project space. In 2018 he edited issue 10 of ANALIZE. Journal of Gender and Feminist Studies, titled “LGBT Rights in Central and Eastern Europe: Theoretical Disputes, Community Building Strategies.” Between 2015 and 2018 he was president of the MozaiQ LGBT Association.